Contour Surveying is the branch of surveying in which variation in the elevation of the earth’s surface and their relative positions are determined with help of contour lines.

The objective of contour surveying is to find out the altitude or height of any surface.

Contour surveying is useful in civil engineering in the following areas: 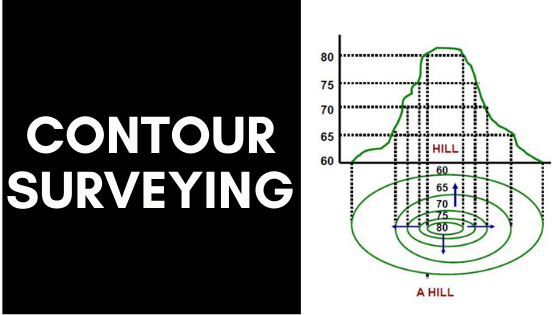 A contour line or simply, ‘Contour’ is an imaginary line passing through points of equal elevation of the death surface. It may also be defined as the intersection of the level surface at a particular ground level.

So, each contour line has a separate and individual altitude concerning the assumed ground surface.

Here we can easily access the altitudes of the earth surface. It also produces a plan of that particular portion. So contour map serves both, a plan and a section of that area.

The constant vertical distance between any two consecutive contours is called the contour interval.

The horizontal distance between the two adjacent contours is called horizontal equivalent. It depends on the slope of the ground.

There are various factors in contour surveying on which the selection of the appropriate contour interval depends. They are-

Purpose of the survey: If the area is to be surveyed is small the contour interval is also small e.g. for earthwork determining etc. Where the large interval is used in large areas compared to less important works.

The scale of the map: The contour interval should be the inverse ratio of the scale i.e. smaller the scale, greater the interval ratio.