Curing of concrete is the process of preventing the loss of moisture from the fresh concrete.

The main aim of curing of concrete is to maintain enough moisture content and favourable temperature in the concrete during hydration of the cementitious materials so that concrete can attain its potential strength and durability.

In India, curing is often neglected in the construction. There is a common wrong practise to start the curing only on the next day of concreting. Even on the next day, the curing delays in making arrangements of required materials.

Importance of Curing of Concrete

Hydration of cement is a long-term process. It depends upon available water and temperature. Thus, curing of concrete ensures continued hydration and, thus continued strength gain.

During the hydration process, the concrete shrinks. If we don’t cure the concrete, it will develop cracks on the surface. The surface cracks allow harmful ingredients to enter in the concrete which corrodes the reinforcement. 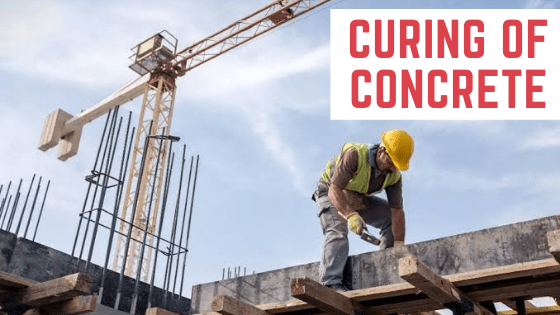 When should we start the Curing of Concrete?

The starting of curing also depends upon various factors such as prevailing temperature, humidity, wind velocity, type of cement, fineness of cement, water-cement ration, size of that concrete member etc. However, the main idea is to keep the surface of concrete wet throughout the hydration phase.

The curing period should be as long as is feasible because the hydration of cement continues for a long time. In general, concrete must be cured until it attains about 70 % of its strength.

Curing Period of Concrete as per IS Code

At low temperature, the curing period must be increased.

Curing of Concrete can be performed by any of the following methods: