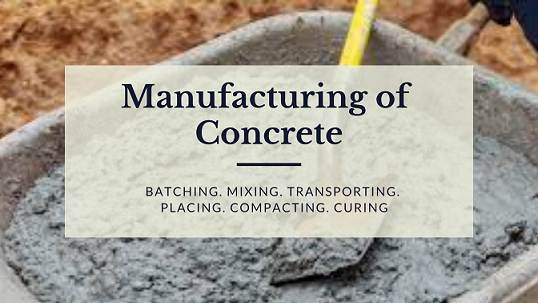 The manufacturing of concrete is broadly carried in six steps, which when sequentially followed, will produce a properly proportioned and complete mixed concrete. Each step has its own significance on the contribution of different properties, in the finished product.

Different types of the quality control mechanism and testing are involved in each phase, to make sure that that the concrete produced is of the appropriate quality and which will satisfy all the requirements of being used as a structure.

The name of the methods and detailed explanation of each method has been mentioned in the following:

It is the first and foremost method of preparation of concrete, which involves the measurements of the materials for making concrete. Before starting any concrete operation, the volume of the concrete required, to do that work, will always be mentioned or should be worked out from the drawings provided for that structure.

Depending upon the volume of the work, and grade of concrete mentioned in the design documents, the volume of the Cement, sand and Course aggregates are determined respectively, through adopting Mix Design methodology. After the volume has been accurately determined, then the process involves accurately measuring the volume of each material on-site, to be used for making concrete. The batching method usually deals with this accurate measurement of materials.

There are two types of Batching methods widely adopted throughout the construction industry:

Cement: the weight of one bag cement is generally taken as 50 kg, irrespective of different wastes. When taken for a small amount, it is generally measured in the weighing machine.

Water: Water is measured in the usual procedure.

After Batching, the mixing phase takes place which is the actual production of the material Concrete. In this phase, the necessity of different construction equipment is immense, which will as well determine the quality of concrete produced.

The mixing phase can be defined as the phase involving, actual physical mixing of different raw material in the provided proportion along with the controlled operation, which produces the material concrete. In various modern construction, the mixing procedures greatly differ, depending upon the type of concrete to be produced, but in simple, it Is as following:

At first, take a small amount of water and put it into a mixture machine to prevent the sticking of any materials in the body of the machine. Then half the amount of course aggregate is placed in it, over which half the amount of sand is placed. Then the full quantity of cement is placed, and over which the previous sequence is adopted. This is done to prevent any wastage of cement, which is of course very costly material. The amount and number of water are equally distributed throughout the mixing phase.

There are widely two types of mixing procedure adopted, which are:

There are two types of Mixture machines generally used which are, Drum Type and Pan Type. The Drum Type mixture machine can further be classified as:

Just as the name indicates, it is the transportation of the Concrete from the mixing site to the placing site. Most of the time, the place of mixing and the place, where the concrete is to be poured, are not the same. So the concrete is needed to be conveyed for some distance, is ordered to pour it in the actual place. There are a number of methods and types of equipment used for the purpose of conveying concrete, within which, some are less famous and some are very popular and used in almost all construction projects.

In this article, I’ve generally grouped the types of transporting equipment, into two categories:

There is another common type of equipment, which is nowadays used for every large construction project and can be operated in both vertical and horizontal directions. The Equipment used is Pump.

The placing operation largely involves the Formwork fixing operation. Before placing concrete to the required place, the Formworks, planks that can be manufactured of different materials, such as Timber and steel and whose depth and thickness depending upon the depth of the structural member and a number of other factors, are fixed on the four sides. This Formwork act as a medium in order to obtain the desired shape of the concrete, by suitably designing the forms, one can attain any Architectural or geometrical shape of the concrete. The removal of the Formworks also depends upon the type of components and various site conditions.

It is a method of eliminating air voids on the surface of the concrete. Whenever concrete is placed, many times, different sizes of air voids already exist in the concrete. If the concrete is not subjected to the Compacting efforts, this air voids remain, which on a later stage results in the reduction of the strength of concrete as well as other different faults. So in order to attain full strength so that it can perform safely as per it’s predecided lifespan, Compacting is necessary.

Compacting may be broadly classified into two types,

As we all know, the reaction between cement and water is exothermic, which evolves a considerable amount of heat. Due to the hydration of Cement, a large amount of heat develops on the concrete surface as well the water quantity gets reduced. Both occurrences pose a great danger to the structural member from the stability point of view. So in order to maintain sufficient temperature, as well as providing adequate moisture to the concrete, Curing is necessary. So, in other words, curing is the process of making the concrete warm and moist enough so that hydration of cement can continue.

There are different types of curing, but the most common of them all is Water Curing.

The time of curing generally depends upon the site and weather conditions. But in Normal condition, a Curing of 7 days may be assumed necessary.

So these are the major methods of Preparation of concrete. There is another method, which is Finishing. It is practically giving a suitable finish to the surface of the member, for Architectural and aesthetic consideration. After going through all the methods, the concreting Operation is said to have been finished, and which is completely ready to get loaded!