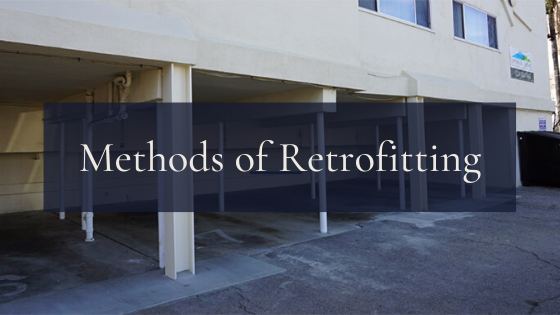 Retrofitting is the modern methodology of strengthening an existing structure. It also includes the adding of new features or technology to the old system.

For example, seismic retrofitting is adopted for strengthening the older buildings and making them earthquake-resistant.

Differences between Repair, Retrofitting and Rehabilitation:

Retrofitting of the Structural Components:

There is a wide variety of modern methods used nowadays for Retrofitting of structural components, but the most commonly used, as well as the most efficient and cost-effective Retrofitting technique for this category, is undoubtedly Jacketing.

Jacketing is one of the advanced Retrofitting technique, in which the strength, as well as the load-carrying capacity of different structural components, is restored.

This process consists of binding plates, which is commonly known as jackets, around the periphery of the column and other structural members and then casting as a whole. The plates are generally made of fibre reinforced polymer(FRP).

Many a time high tensile steel wires are wrapped around the components and the Jacketing is done by prestressed concrete. This significantly increases the load-carrying capacity of any structural members.

Retrofitting of the Structural System

It is a process of adding beams within the main girders of the existing concrete deck, in order to reduce the deck span and increases the load-carrying capacity of each unit.

it is a widely used method of bridge Retrofitting. In this method, reinforced concrete walls are placed, between the main reinforced bridge piers, in order to reduce the load intensity on each pier. It is a very common type of Retrofitting used for Retrofitting of structural System.

Widely used for preventing the seismic activity, affecting different aspects of structural System. In this method, seismic Isolation bearings are used to improve various performance values during an earthquake.

Dampers are also used to improve the performance of structures during an earthquake.

Foundation Retrofitting is another modern methods to resists the structures and their Components, from the impact of earthquakes and other natural disasters. Some of the Techniques are mentioned in the following:

When the foundation piles of a structure are greatly affected by the ground motion or soil collapse, addition of piles to the existing piles increases the load-carrying capacity and efficiency of the structure.

This is another method of strengthening foundation in the place where the soil is of inadequate bearing capacity. There are lots of ground improvement techniques available such as soil cement stabilization, mechanical stabilization etc, which in addition affects the whole structure.

This is another most important aspects of Retrofitting techniques. Over time, due to noise, pollution, vibration and many other reasons, various Historical and ancient structures lose its architectural beauty and strength.

In order to preserve the historical and heritage structures, retrofitting is necessary.

Some of the methods of Retrofitting are historic Structures are:

Many of the ancient structures are old masonry construction, which is good in compression, but very weak in tension. Though by post-tensioning components are introduced in them, resulting in a significant increase in the tensile strength of the Masonry structures.

It is also one common method of Retrofitting, includes injecting epoxy to the structures.

Though there are a few handfuls of disadvantages, the number of advantages of Retrofitting techniques, far more exceed these in quality. As time will pass on, these maintenance techniques will improve the structure to a great extent, boosting the performance in all aspects.

Study on Various Methods and Techniques of Retrofitting