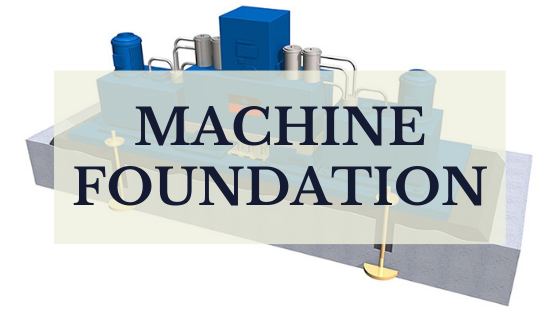 Machine foundation is designed so that the dynamic forces of the machine are safely transmitted to the soil through the foundation.

Every Machine is different and may have a different effect such as rotation, impact etc.

2. Impact Machines that produce impact loads. The dynamic load reaches a high value within a short duration and then die out quickly.

3. Rotary Machines are a high-speed machine.

It consists of a heavy block of concrete resting directly on soil or supported on piles or a  pedestal resting on a footing. The heavyweight of the foundation results in a smaller natural frequency of the system.

A block foundation is easy to construct and have high bending and torsional stiffness.  It is commonly used for compressor and reciprocating machines. 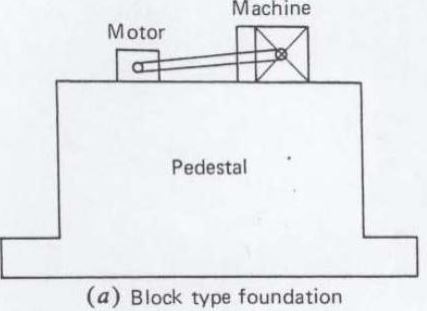 When a relatively lighter foundation is desired, the box or passion type of foundation may be provided. It consists of a hollow concrete block that can be used as an operational space and supports the machine on its top. 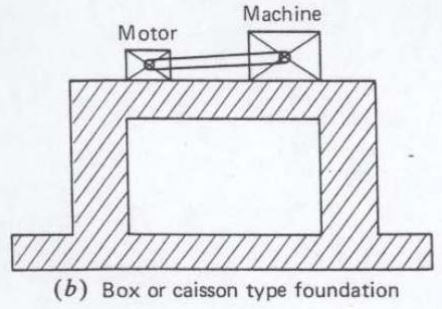 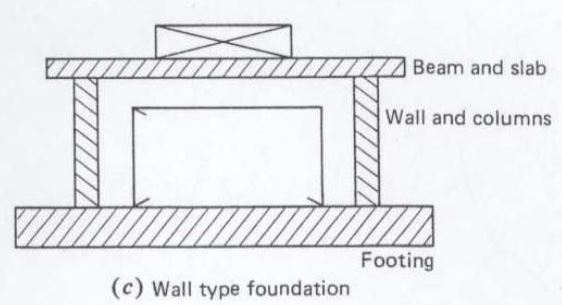 The machine is placed on the plate made of concrete resting directly on soil or supported on piles. The plate foundation has high static stiffness and is easy to construct.

Effect of shape, size, and moment of inertia:

Increase in footing mass or moment of inertia leads to a decrease in resonant frequency and effective damping but increase in amplitude at resonance. The shape of the foundation does not have a great influence on the response of footings with equal areas. In case of very long and narrow footing, it is a common practice to idealize shape to that of an infinitely long strip.

Effect of finite depth of stratum over bedrock.:

In the case of vertical and horizontal modes of vibration great influence of bedrock has been observed. A decrease in depth of soil stratum leads to decrease in radiation damping and an increase in the resonant frequency of the foundation soil system. Rocking and torsional mode of vibration is influenced by the soil close to the surface.

Embedment increases the stiffness of the soil foundation system. This leads to a decrease in amplitude and increase in resonant frequency. Effect of embedment is more in two rotational modes of vibration than  translational modes

In the design of machine foundations, the first numerical limits of failure need to be calculated. Second, the relation between applied loads and quantities which are significant in design. Third, To evaluate the significant quantities and what are the errors involved. Finally, after the inaccuracies involved in evaluating these quantities are determined, what sort of factor of safety do we apply in the design process is to be calculated.