Before initiation of Bidding and Construction phase of any project, i.e. in the pre-bidding phase, the viability of the project is checked by preparation of Conceptual design data, drawings and preliminary estimate, which is then passed through various administrative and technical authority, to check the financial and technical aspect of the project and to give the “go-ahead” signal to the project.

After the approvals, the first thing which is prepared is the detailed design of all the components of that project, as this will enable the preparation of Detailed Estimate, in order to make the owner aware of what actually the project will cost. 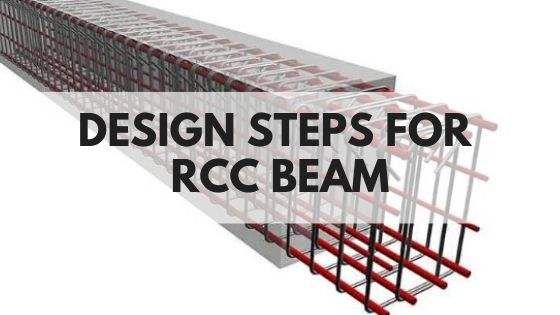 Design steps for RCC beam are as follows:

Step 1: In the first step, calculate the intensity of the load which is expected to act on the beam. This can be found out by adding the transferrable loads from the slab to the beam, and the self-weight of the beam. Also find out the clear span of the beam to be designed, from the provided drawings.

In the case of Cantilever Beam, the clear span(overhang portion) is mostly adopted as the effective span to be used for the purpose of Design. After finding out the effective span of the beam, find out the bending moment and shear force, from the loads obtained through step 1.

Step 4: Perform the Depth check step. The depth check formulae provide the minimum required depth of that beam and can be found out from any Design book. The provided depth should always be equal to or greater than minimum depth obtained. If not, the section should be redesigned by using different span to depth ratios.

Step 5:  Calculate the amount of reinforcement required. As the section Designed should be an under reinforced one, so that formulae required for under reinforced section should be adopted. After putting the required value in the formulae, a quadratic equation is going to be formed, which when solved, provides the amount of reinforcement used, depending upon the bending moment and the dimensions of the beam.

The design for bending is completed

It is also checked against the minimum spacing required.

Step 10: This is the last step of the Complete Design process, in which, detailed design data are provided and a cross-section of the beam showing the reinforcement detailing is also provided.

These are the steps required for the design of a beam (Simply supported and Cantilever). The steps can be remembered through practising, so the more the practice, more is the process becomes clear to the reader. The design of a beam accounts for a great part in Civil Engineering Course curriculum, as well as in the industry, where a designer is required to be very efficient and well known about every procedures and Method of Designing.

previousWhat is Soil-Cement?
nextWhat is Ferrocement?