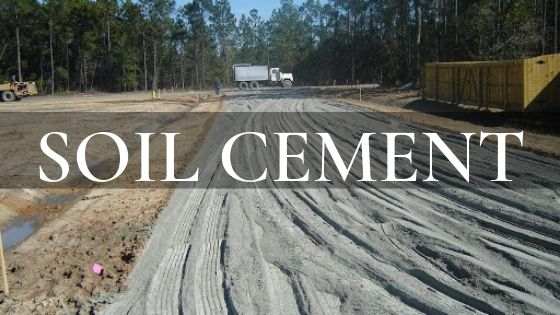 Soil-cement is a mixture of soil and measured amount of cement, and water compacted at high density. They all together form a hardened mixture like concrete, under the hydration action of cement.

It is generally used as a low-cost pavement base for airports, parking areas, residential streets, roads, shoulders, and materials-handling and storage areas. It has great strength, durability and low first cost to make it the outstanding value in its field. A thin bituminous surface is mainly placed on the soil-cement to complete the pavement.

Soil-cement is also called the cement-stabilized base, or cement-treated aggregate base.

Soil-cement is primarily used as a base course for- It is also used for:

How is Soil-Cement Manufactured?

Before the beginning of construction, simple laboratory tests are done to establish the cement content, compaction, and water requirements of the soil material to be used. Tests are made to see that the requirements are being met. Testing assures that the mixture will have the strength and long-term durability. No guesswork is involved. All the calculations are made based on specific tests. This would ensure attainment of strength as well as long term durability.

Main processes involved in the construction of soil-cement are:

At the central mixing plant, mixing of the soil-cement mixture is done. The final mixture is then moved to the job site and laid over the already prepared sub-grade level.

Initially, a proper quantity of cement is being spread over the soil and mixed homogeneously. Then a measured amount of water is added and mixed thoroughly. The mixing can be done by hands or with mixing equipment or machines.

Now the compaction of the whole mixture is done by normally used compaction equipment. The compaction is done with high precision to achieve the maximum advantage of the cement used.

Once it is done, the whole mixture layer is cemented permanently at a very high density. After compaction, it won’t let the soil to undergo further consolidation or settlement under huge traffic.

The last step is curing. It is performed to prevent evaporation of water to the atmosphere. Proper cement hydration will be enabled only with an adequate amount of water. For this, a bituminous coating is laid over the layer and would act as a bituminous surface. The thickness of the layer can be increased if the pavement is constructed in an area with huge traffic.