Structural vibration is one of the big issues faces by buildings or structures. Commonly the vibrations are arises from seismic forces or man-made sources such as crowd movement, traffic, blasting, heavy machine operations etc. The vibrations are oscillatory motions and can experience in building through floors usually. This can affect the strength of structures or even leads to failure or collapse of the structure itself. The collapse of the Tacoma Narrow Bridge (1940) is an example.

When vibrations from the source coincide or match the natural frequency of the buildings it gets vibrated in much bigger amplitude (which is called Resonance) and this is extremely bad for structural stability. 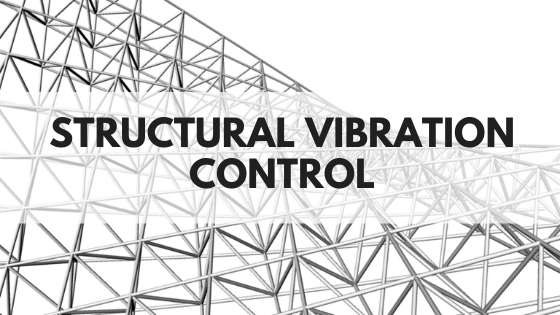 There are a variety of sources can be found for vibrations which affect buildings or structures. This can be listed as follows:

While designing buildings or structures it is important to ensure that the structural members are capable of resisting these forces and prevent fatigue due to this cyclic loading. From the above sources, seismic forces and wind forces are very critical.

Effects of Structural Vibrations in Buildings

The vibrations can transfer through soil (if it is an external source) and propagate through foundation, walls, floors etc. of buildings and can cause cracks in concrete, bricks, or other masonry structures etc.

In extreme cases, the vibrations may cause damage to the buildings. When cyclic loading is repeated that may cause strength loss and even leads to fatigue failure. As mentioned above if the vibrations coincide (matches) with the natural frequency of the structure resonance occurs which induces vibratory motion in higher amplitude. Rigid components generally affected than flexible components in buildings or structures due to vibrations.

The vibration induced by traffic can cracks the building walls or ceiling or even foundation too. The traffic vibration is; commonly varies in between 5Hz to 25Hz. If a building is subjected to traffic vibration for many years fatigue damage can occur also sometimes soil settlement can happen (mostly in sandy soil) and that leads to uneven movement of buildings. Seismic related damages in buildings are almost similar to the above mentioned. The destruction intensity depends on the seismic force (P-waves and S-waves)

How to Control Structural Vibrations?

The vibration control systems can broadly be divided into three categories:

In this method, mechanical devices of components such as shock absorber, air cushion or cylinder piston arrangement Tuned Mass Damper (TMD) etc. used to absorb vibrations. It does not use any type of sensors or external power source. These energy dissipating devices attached to the main structure and when the vibration happens it will absorb the energy and stabilize the building. The base Isolation method is also a passive vibration control technique

In this method, the vibration or unwanted motion on buildings or structures are detected by the help of sensors and a powered actuator to generate force to prevent the vibration. This method needs an external power source or energy to work. Active Brace System or Active Tendon System are examples of active vibration control.

Vibration control is very important for the stability and durability of a building or structures. But unfortunately, there is not giving much importance to vibration control in buildings. From the project planning, itself should find out the possible vibration sources that can affect the structures. Also, maintain smooth roads and keeping a safe distance from roads to buildings will reduce the vibrations due to traffic movement. These possible remedial methods should be adopted to minimize the vibrations and ensure that the designed structural members have the stability to overcome the dynamic loading (including earthquake loads) which is hazardous to buildings.