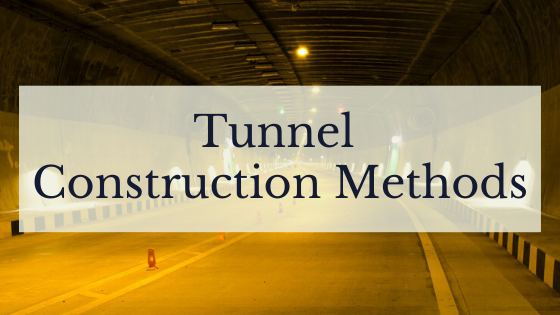 Tunnel is the pathway constructed underground or across the hills for the purpose of transportation or irrigation.

The construction of tunnels depends upon the factors like ground condition, groundwater, length and diameter of the tunnel, transportation, depth of the tunnel, cost of production, and risk management.

The geological investigation decides the mode of excavation, whether it is drilling by machines or blasting or boring. For the survey of tunnel construction, high accuracy level work is preferred. Long tunnel across mountains which are constructed from opposite sides commonly meet with an error of one foot or less. Now laser technology (laser beam) used in tunnel construction as a reference line.

The cut and cover method are used for the construction of a small or shallow tunnel. For that, a trench is excavated and the tunnel is constructed (base and side walls are made and it is roofed by concrete slabs) and cover it up. It is the oldest method of and economic compared to other tunnelling techniques. Pre-cast materials also used in this method. It is adopted for the construction of underpasses and small underground passages in urban areas.

Tunnel Boring Machine (TBM) is used in the boring method. Commonly adopted for the excavation of long tunnels and boring through different types of soil strata or rock masses. TBM can provide an exact work profile in excavation and reduce causalities in tunnelling. The daily excavation output of TBM cans up to 40m. However, it takes more time in case of hard rock and not economical compared to the drill and blast method.

In this method holes are drilled in rocks and explosives are loaded. Blasting is carried out by triggering the detonator which is connected to the explosives. And the rock particles carried out from the tunnel. The blasting should be controlled and make sure that adjacent rock mass didn’t get and faults due to blasting. Otherwise, it will affect the stability of the tunnel.

This method is also known as the New Austrian Tunneling Method (NATM). In this method, the site for the tunnel divided into several segments, and each segment mined using an excavator. After the rock or soil mass removed support is given such as pressurized concrete is applied to the sidewalls and roof (rock bolts, steel mesh, fiber reinforced concrete used as supports) to stabilize the structure. This method is slow but helpful to work in areas where existing structure nearby which can’t be replaced.

Pipe jacking is used to construct a tunnel under existing structures or roadways or railways or under a live location. Hydraulic jacks are used to push specially made pipes across the ground, and the pipe diameter is limited to 3.2 meters.

Box jacking is similar to pipe jacking, instated of pipes box-shaped tunnel is pushed across the ground. The span of the box jack is comparatively longer than the pipe jack. Sometimes this method is used in underground railway projects.

When a tunnel is constructed deep from the ground surface shaft is built-up to the depth of the tunnel, which is a permanent structure with concrete walls. Shafts are provided with both inlet and outlet. Intermediate shafts are also given if the tunnel is long. It is used as temporary access to tunnel during construction later used as ventilation to the tunnel and emergency exits.

Lighting and Drainage system in Tunnels

Watch: How does a tunnel boring machine works?

previousNoise Control in Buildings
next10 Recent Trends in Civil Engineering