The runoff that is observed during rainfall or snowfall or any other form of precipitation percolated into the soil or gets absorbed by plants. Most of the urban areas have impervious surfaces like concrete and bitumen leading to accumulation of stormwater.

If the rain continues, the level of water in such areas increases and ultimately may lead to floods. To avoid such circumstances storm water drains are installed to drain the excess water from the impervious surfaces.

A storm is a natural phenomenon associated with heavy precipitation and strong winds. Storm water drains are the infrastructure designed to collect the excess runoff from precipitation on both permeable and impermeable surfaces. Most of the runoff that flows into the drains is from pavements, roads, parking lots, footpaths and roofs. The storm water drains are connected to storage tanks so that the excess flow can be stored without compromising the carrying capacity of drains. After the storm has receded the water stored in the tanks is gradually released into naturals streams, rivers and artificial channels. And for this reason, hazardous substances or waste materials should not be released into the drains. To prevent the release of waste materials into the drains the openings have inscriptions of fish to indicate them as storm water drains.

The working structure of a storm water drain consists of

The inlet allows runoff to be drained into the channel. The openings of the inlet are designed such that it allows only runoff to pass through it and restricts any debris or waste to flow into it.

To withstand the weight of moving vehicles the inlets are made of cast iron or Reinforced cement concrete. The inlets have grids to block any unwanted material to pass in and most importantly to prevent people or vehicles from falling in the drain.

Despite the precautions taken to prevent waste from entering the drains some of the debris still passes through and falls into the channel which gets collected in the catch basin. The catch basin does not allow the movement of any debris into the pipes and further into the storage tanks.

The collected storm water then flows through a series of connected pipes and reaches the storage tanks. The storm drainage pipes are made of PVC, cement concrete, cast iron or steel and can be designed in many shapes however circular pipes are more preferred. The storm water stored in storage tanks is gradually released into a natural flow stream through outlets.

Storm water drains are generally located near the surface of the ground to collect surface runoff whereas sanitary drains are located at a depth near the basements of buildings to accept sewage from them. 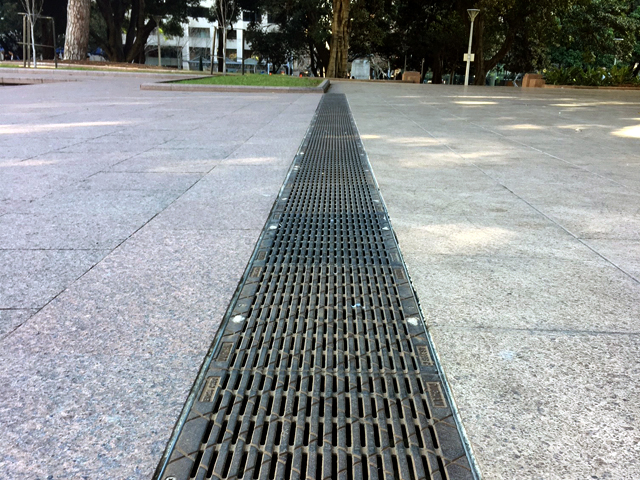 Tokyo is a city of rivers, frequent earthquakes, typhoons and floods. Tokyo has an annual average rainfall of 1500mm which shows the probability of the city flooding is high. Despite being in a geologically challenging place Tokyo has the largest underground storm water storage basins. The storage tank is five storeys deep and the length of two football courts. The storm water is drained from five major rivers of the city through giant cylindrical storm water drains and passed over a six-kilometre long passage to reach the storage tanks. As the facility is being filled turbine-powered pumps are driven to discharge the storm water into the main river the Edo river. This engineering marvel has reduced the risk of Tokyo’s flooding by fifty percent.

Storm water is an important infrastructure that cuts the risk of flash flooding during a storm outburst. Proper maintenance of storm water systems ensures the free flow of traffic during heavy rainfalls and prevents damage to roads and pavements. Sustainable storm water drainage system plans have been implemented in India in states like Chennai, Karnataka to minimize the level of waterlogging and damage. Proper maintenance of these drains is imperative to avoid flash floods and mimic natural drainage from a site.